WASD or arrow keys to navigate the space.

When thinking about a world 500 years in the future, the concept of automation first came to me. What would a world look like if machines had supplanted human jobs, even the most high-level jobs that tap into human creativity and emotions (think therapists, teachers, artists)? I also began to think about the rise in both recreational and prescription drug dependency, as well as China’s policing society.

From here, I combined these two concepts into a possible world.

As governments around the world begin to realize that machines can do tasks cheaper and more efficiently, automation begins to infiltrate portions of the government, the legal system, and the economic system. Slowly, machines chip away at all human functions. When one nation adopted an AI-dominated system, other nations felt the need to follow along to compete. Five hundred years later, each nation decided to join together to create one composite nation where essentially all decisions are purely automated. It’s every economist’s dream: to achieve absolute abundance and eliminate all forms of scarcity. We have reached a “Pinnacle.”

The growing reliance on machines, however, has led to mass unemployment and a loss of spiritual purpose amongst humans. This is a welfare state with a surplus of wealth, but with a lack of jobs.

The Pinnacle is structured to be self-reflexive of the guest’s circumstance. The space is aware that you are from five hundred years in the past. Helen is your virtual tour guide, taking you through the museum, explaining the significance of each exhibit.

The Pinnacle is a celebration of how far society has come. It celebrates the freedom of humans from the constraints imposed by work and embraces the benign rule of the machines. Helen is talking to you as a time traveler, addressing you in an enthusiastic, almost-excessively positive manner.

As one would suspect, a world dominated by machines has numerous first and second-order consequences. Here are a few that are showcased in the exhibits of “The Pinnacle.”

The opening lobby consists of a dark, gloomy atmosphere, with a grand sculpture as the centerpiece. This layered sculpture is symbolic of the growth machines have gone through from primitive technology to a prosperous now. As the guest continues, Helen notices a lack of passion and energy in the guest, which is normal for someone of the past. She injects a drug. One of the many consequences of this world is humans turning to drugs to counteract the deep-rooted feelings of loss of purpose. Humans have no choice but to seek ways to cope with this spiritual void. There’s one universal drug that has gone rampant; a drug that causes universal contentment.

The drug has clearly kicked in by the next scene. The vibe is dreamy, heavenly, and majestic The Productivity Room is a celebration of efficiency. There are photographs of massive industrial sites and machine production.

The next scene is Leisure World. Now that machines have automated everything, this has caused an explosion of leisure activities, material products, and a health obsession— all to the nth degree. The images, sculptures, artifacts, and videos reflect this.

As the guest makes their way to the back of Leisure World, they have access to the “Storage Attic.” After climbing a spiral staircase, the guest enters a room full of cultural artifacts, many of which you should be familiar with. In this world, artifacts are seen as a garbage, useless relics of the past. They are ashamed to place these artifacts in the museum as to pollute the guests with reminders of the past. Since the guests would be more familiar with these artifacts, Helen asks the guests to walk up to any of the artifacts and write down what it means to them.

Finally, to exit the museum you have to walk through the Hall of People, an endless hall of forgotten individuals. It’s a visual metaphor for how much is lost and forgotten. The guest enters, the doors close, and you are locked in.  As with everyone else from the past, the guest becomes a part of this world as a forgotten relic. There’s no clear-cut game over, just a moment of limbo.

Overall, this project has taught me about the process of world-making and seeing it physically come to fruition. It made me think about how to design spatial layouts and create effective UIs. There were points when I struggled both technically and conceptually. One thing I wish I had improved upon was created a world grounded in research. Yes, I do envision aspects of my world coming true, but it’s supported by personal observation, not research. I wish I began with a research foundation. As someone who sees themselves creating experiences and spaces that tell stories and suspend imagination, this project was a step in that direction.

Thank you, James and Pierre for your support. 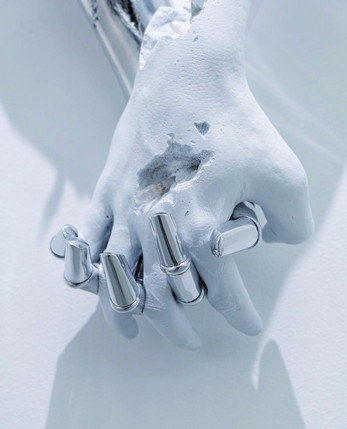